Recycled water is used across the country (i.e. California, Florida, Arizona) and internationally as a sustainable water source to irrigate food crops, but is underutilized and underdeveloped here in Washington state. More irrigation use of recycled water would reduce river water withdrawals, protecting salmon and other wildlife that depend on cool and clean water. 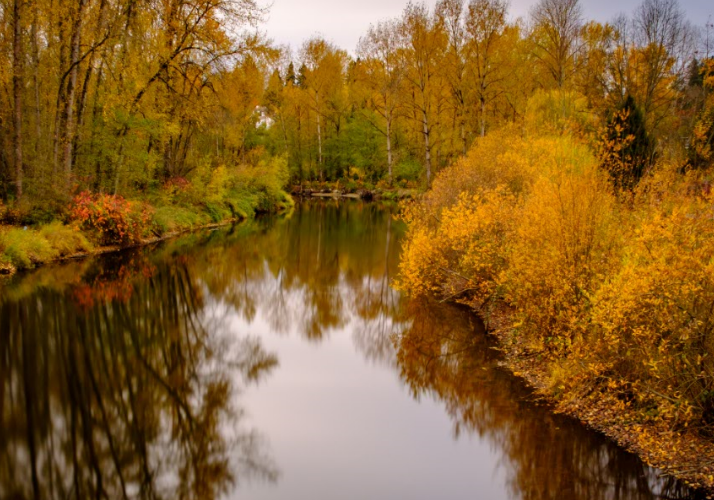 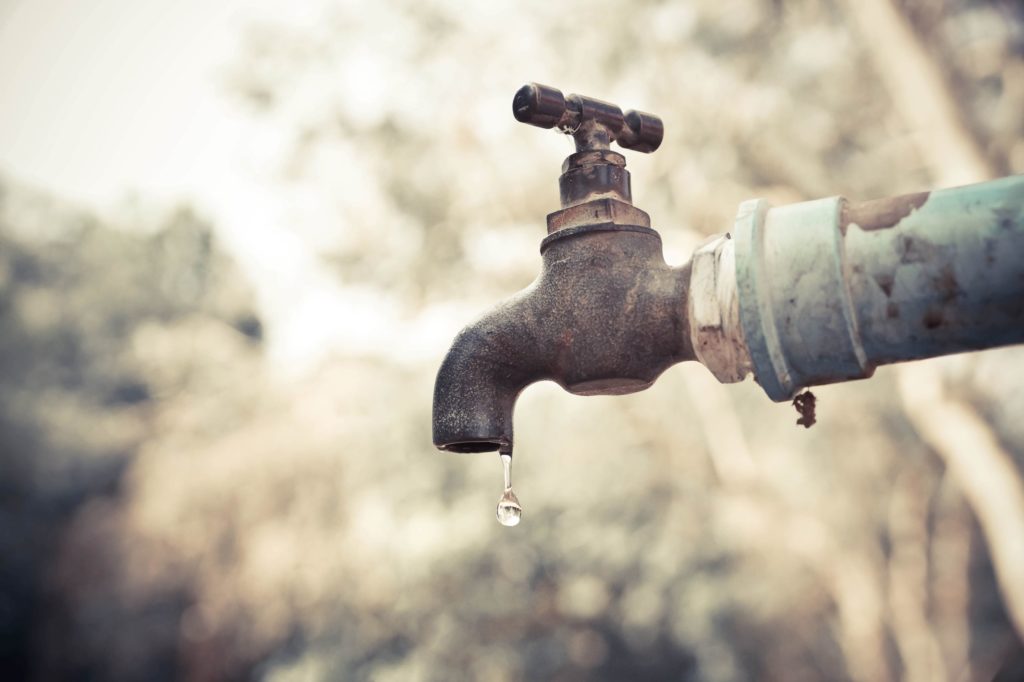 The Driver to Use Recycled Water

Many of our states rivers and streams are overdrawn by out of stream uses during the late summer when flows are absolutely vital for the species survival of Salmon, steelhead and other aquatic species. Demand for freshwater resources in Washington is outgrowing availability. This availability is exacerbated by climate change, increased demand from population growth, and limits to new water rights.

These conditions compel a new way of thinking about agricultural production and irrigation sources, for the health of rivers, and climate resilient and sustainable agriculture.

Irrigating with recycled water in specific basins can serve as a vital tool to protect flows for salmon, relieving rivers of agricultural surface diversions.

Recycled water irrigation is already standard practice in some regions of the United States, including California’s Salinas Valley where it has been used to irrigate fruits and vegetables since 1998, providing more than 90% of the irrigation supply. In Washington state, recycled water has yet to be fully realized as a water source for food crops. 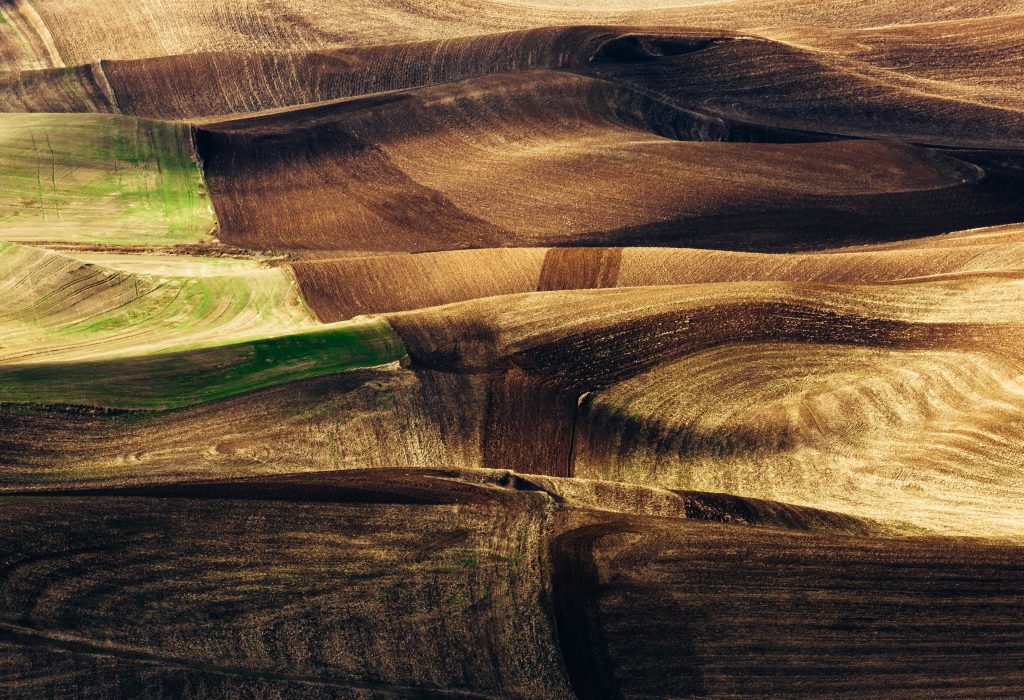 Tapping into a Sustainable Water Source of Water for Agriculture

Although recycled water is strictly regulated, there is growing concern about trace amounts of unregulated chemicals in recycled water that might be exposed to people and the environment. These chemicals, known as contaminants of emerging concern or CECs, come from various products we use every day, like medicines, shampoos, food packaging, drinks, and clothing.

Click on the tabs below to learn more about each project component!

Conduct an in basin research study to address and improve perception of the use of recycled water on food crops.
Outreach

Evaluate perceptions and concerns related to the use of recycled water for irrigation.
Improving Flows

Conduct an in basin research study to address and improve perception of the use of recycled water on food crops.

In spring of 2020, a demonstration garden was built on the grounds of King County’s Hollywood Pump Station in Sammamish Valley, WA. The Sammamish Valley is one of five designated agricultural production districts in King County and is home to many vegetable farms.

In order to address concerns about the use of recycled water on food crops, an experiment was designed to provide a local example of how the recycled water compared as an irrigation source to river water. Because recycled water is an alternative irrigation source to river water, we designed the research garden so that the only variable in the research was the water source. Sixteen raised garden beds were installed and planted with kale and carrots, half of which were irrigated with recycled and half were irrigated with Sammamish River water.

The water, soil, and plants were tested for hundreds of contaminants of emerging concern, also referred to as CECs, from each water source. The study looked extensively at what CECs were present in the crops irrigated with both water sources. What did we find? Some CECs are present, but at such low concentrations you would need to eat thousands of pounds of the produce to reach a single dose of certain drugs. 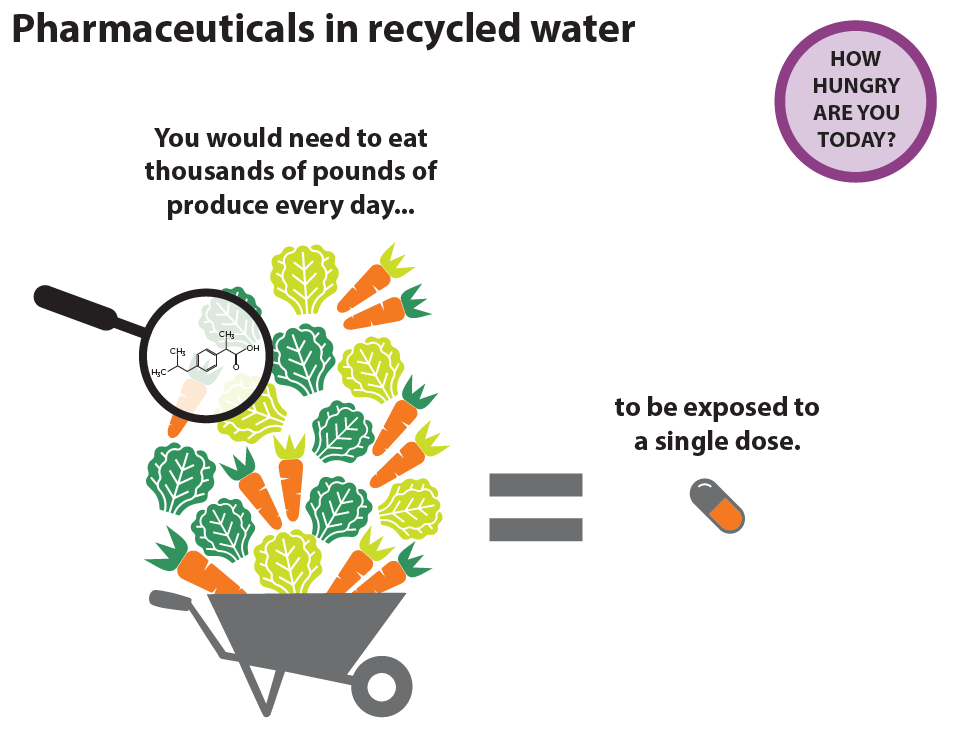 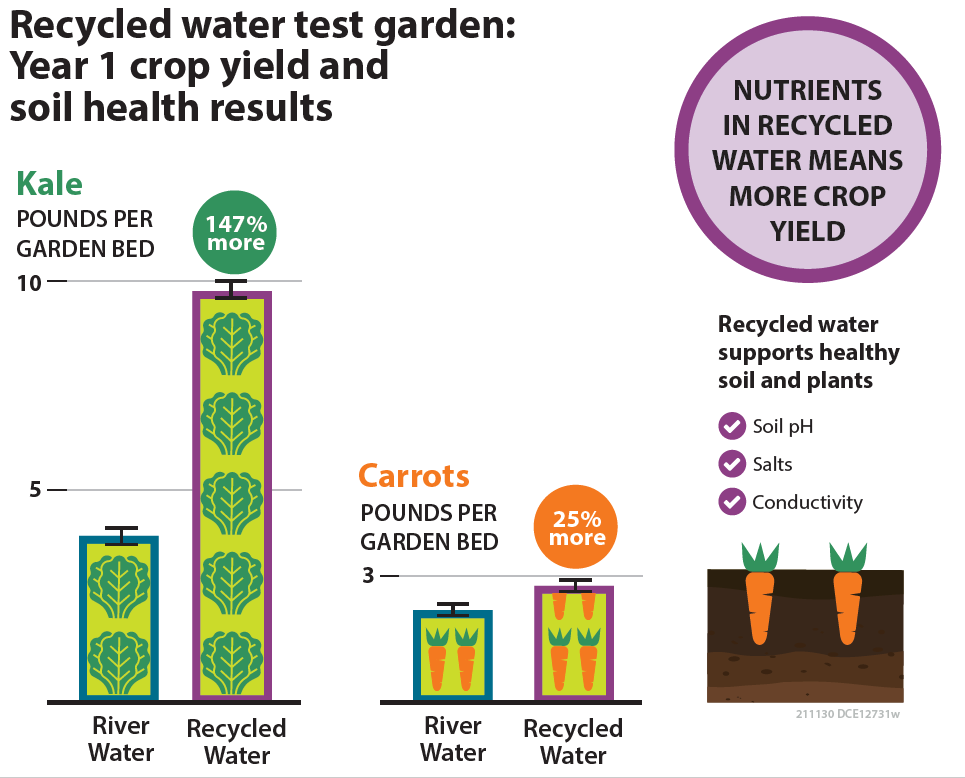 Although recycled water is already used to irrigate food crops in other parts of the USA, providing a local example under local  cultivation conditions, is important to make recycled water a viable water alternative for Sammamish Valley producers.

Evaluate perceptions and concerns related to the use of recycled water for irrigation.

A critical component of the Sammamish Valley Recycled Water Project is outreach throughout the food supply chain. Beginning in 2020, project partners interviewed producers in the Sammamish Valley to understand their baseline knowledge and sentiment towards recycled water as a sustainable irrigation source. Producers were also invited to the demonstration garden in 2020 and 2021 to see the experimental design and learn about the project results. In 2022, a presentation for producers was held to share the first year of results from the project. 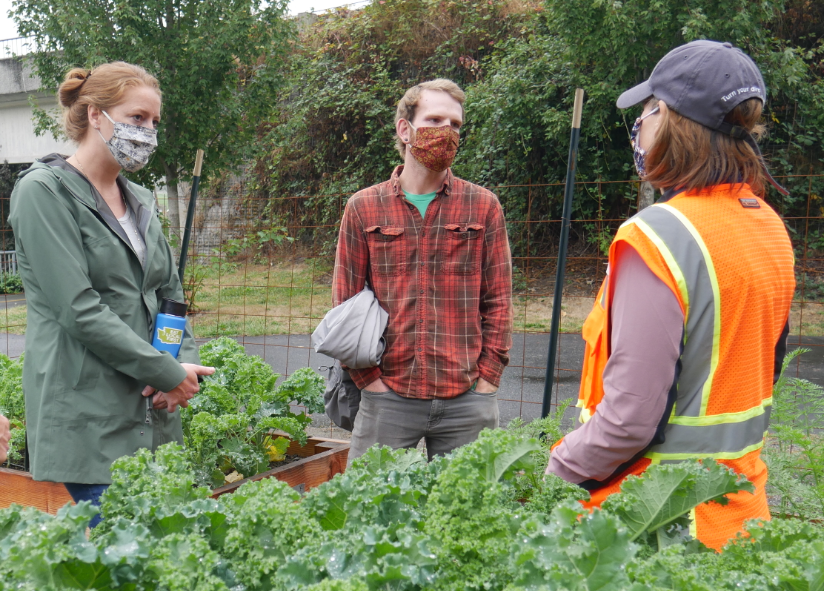 In 2021, the project sought to identify consumer sentiment and perceptions on the usage of recycled water for irrigating food crops in Washington state. Presentations, tabling at farmers markets, focus groups, and surveys were used to assess how Washington state consumers perceive recycled water for crop irrigation and it’s social acceptability. Results from this outreach show that the majority of consumers support the use of recycled water on food crops, and that this support increases when there is an associated environmental benefit such as flow restoration. 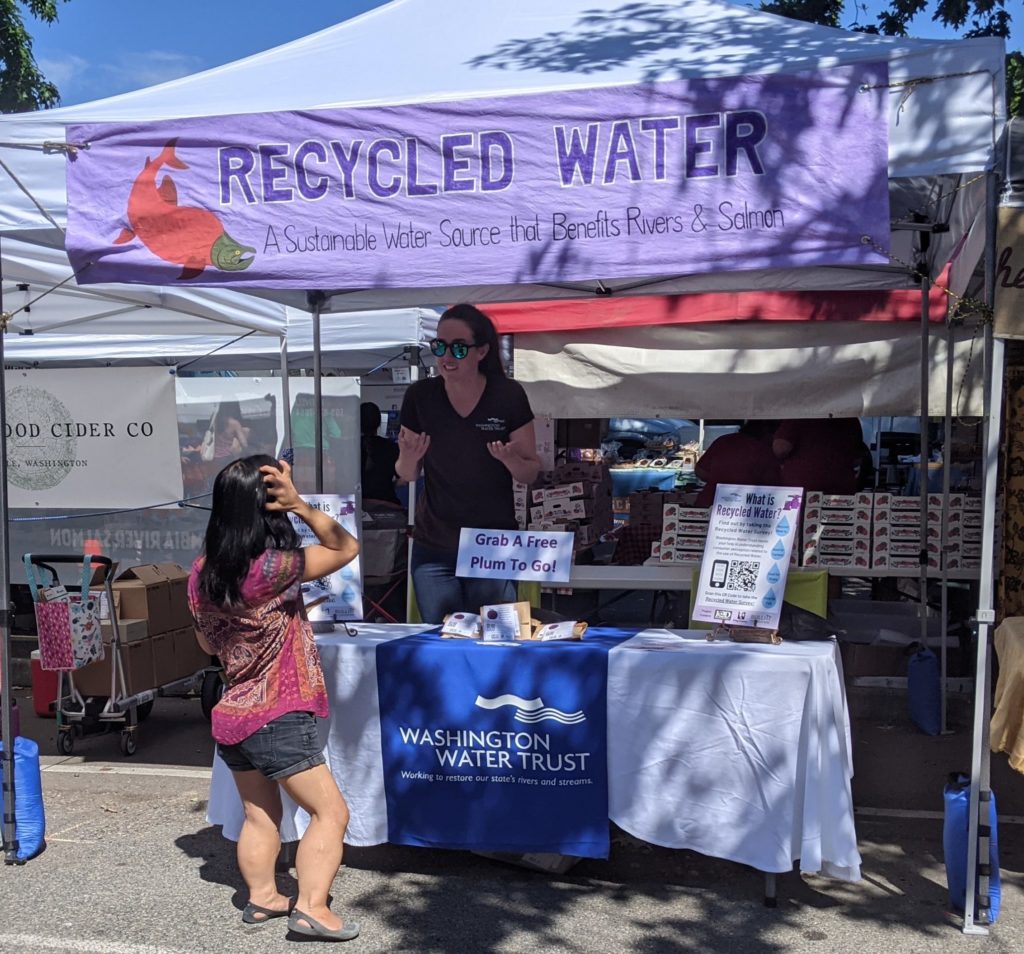 Reduce the reliance on surface diversions from Sammamish River.

Recycled water can provide producers with an alternative water source, eliminating their need to divert from rivers and streams during late summer months – the water critical times of the year.

With its lush green forests and ample rainfall during the winter months, there is an impression that water is an abundant resource in Western Washington. However, climate change and population growth impacts are increasingly putting stress on our waterways and many  rivers reach critically low levels in the summer months. Low water levels can lead to high river temperatures, fish passage concerns for migrating salmon, algal blooms and fish kills. One way to combat this problem is to use more sustainable sources of water that keeps more water instream.

In the Sammamish River, if irrigators switched from a river diversion to recycled water for their irrigation source, up to 5 cfs of additional flows could be kept instream during the irrigation season. During the later summer when flows can get down to 20 cfs, this would represent a 25% increase in flows. 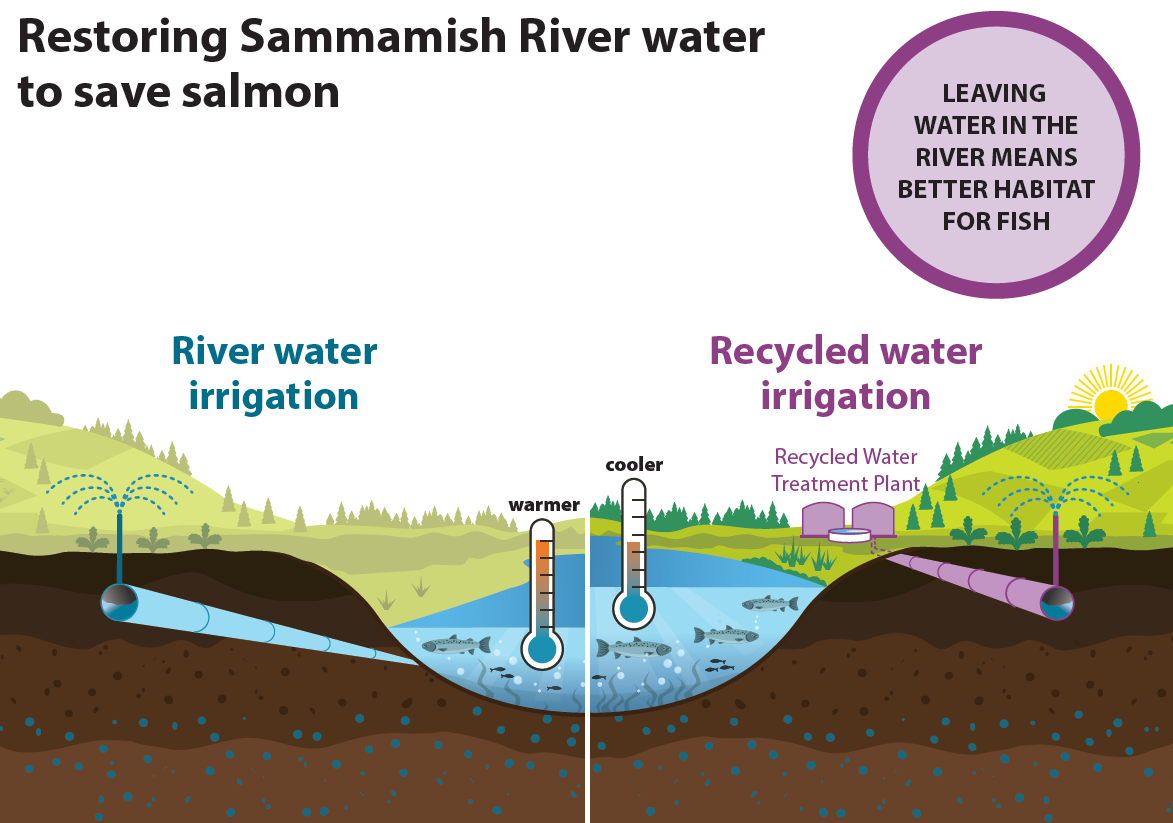 To learn more about how King County uses recycled water, visit their website.